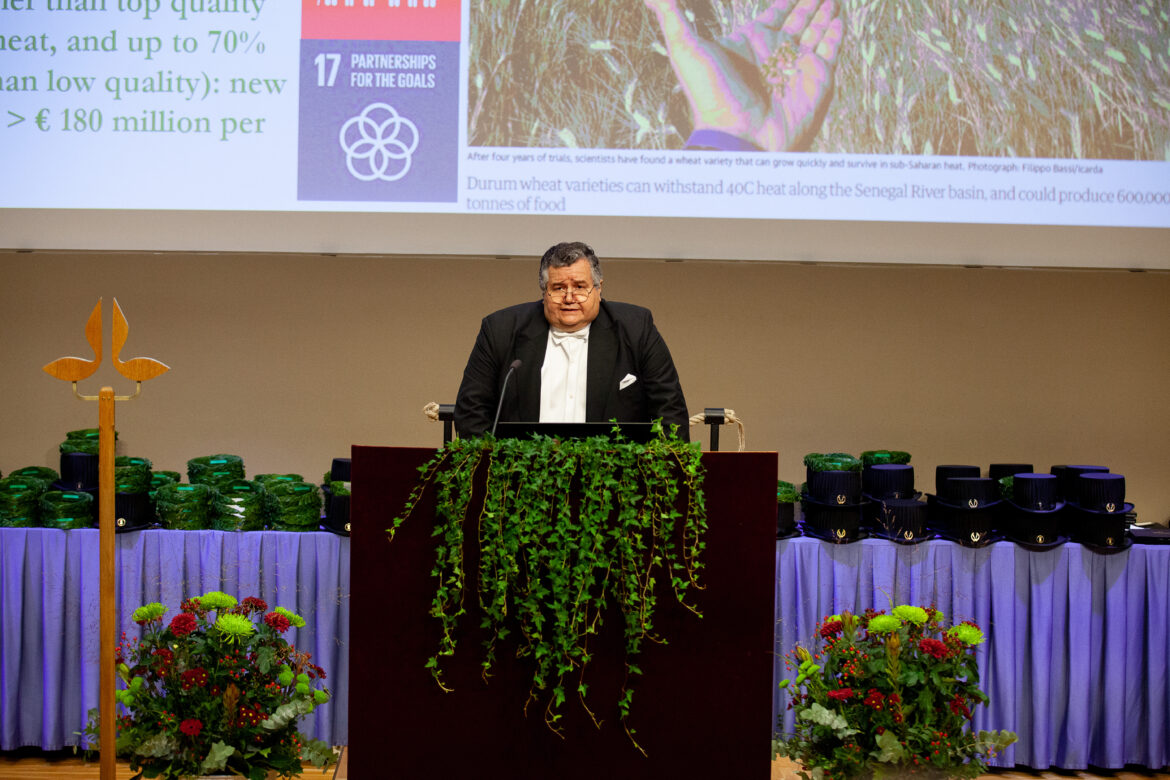 14 November, 2022 Researcher in the spotlight

Rodomiro Octavio Ortiz Rios is the Chair Professor of Genetics and Plant Breeding at SLU. Professor Ortiz significantly contributes to the development of plant breeding as a key scientific discipline helping to fight hunger and malnutrition in developing countries, as well as to produce high-yielding and healthy crops. Would you like to know more about his fascinating career? Read the interview below!

I am the principal investigator of the SLU-led project (dubbed by London’s The Guardian as “Wheat in the heat: a crazy idea that could combat food insecurity”) in a research-for-development partnership with the International Center for Agricultural Research in the Dry Areas [ICARDA, Morocco], Institut Sénégalais de Recherches Agricoles [ISRA, Sénégal], and the Centre national de recherche agronomique et de développement agricole [CNRADA, Mauritania]).

We have been using genetic tools and genomic-based methods to identify DNA regions associated with heat tolerance in durum wheat germplasm (landraces and elite germplasm) that were exposed to a north-south heat gradient in Northwest Africa. Likewise, we are working together with the International Institute of Tropical Agriculture (IITA, Nigeria), the National Research Organization (NARO) of Uganda, the Tanzanian Agricultural Research Institute (TARI), and the Alliance Bioversity International – Centro Internacional de Agricultura Tropical (CIAT), to assess the efficiency of ploidy manipulations (scaling up and down chromosome numbers) and multi-site trial testing over cropping cycles (i.e., several years) for breeding cooking banana hybrids for the Great Lakes Regions of Africa.

Together with Fredrik Reslow at SLU, we continue running Svensk potatisförädling for developing new potato cultivars for Fennoscandia. The high tuber-yielding SLU 1314015 has been rated among the best breeding clones and is highly resistant to late blight, thus being advanced for further multi-environment trials aiming at its cultivar release. We have been also exploring with students and co-workers genome-based prediction of breeding values (GEBV) for improving potatoes and found that accuracy estimates increased by including the genotype × environment interaction in the multi-environment, multi-trait modelling.

Tell us about your latest publication

We estimated genetic gains made in potato breeding in western Europe for the last 200 years. The knowledge about genetic gains assists in measuring the results of previous breeding for target trait(s) and fine-tuning the strategy for their betterment. For this purpose, we used multi-site testing in Skåne (Helgegården and Mosslunda) and Norrland (Umeå) for a direct comparison of 170 potato cultivars released and grown across Europe in the last 200 years to understand how breeding contributed to improving productivity (total tuber weight and according to sizes), resilience (host plant resistance to Phytophthora infestans causing late blight) and quality traits (tuber flesh’s starch and reducing sugars).  The annual rates of genetic gains were estimated by a simple regression considering the year of release as an independent variable and the cultivar’s best linear unbiased predictor (BLUP) for each characteristic as a dependent variable. The annual genetic gains for tuber yield and flesh’s starch content for potato breeding in Europe were about 0.3 and −0.1%, respectively, thus telling that the realized genetic gains of foreign cultivars for both traits are small or negative, respectively, in the Nordic testing sites. These cultivars bred elsewhere in Europe are not always very suitable for the challenging Nordic agroecosystems, as shown by the results of this multi-site testing. Such an approach of relying on foreign cultivars has been advocated for not funding potato breeding in, and for Fennoscandia by those ignoring the results shown by our genetic research.

What led you into your particular field of research?

I have been involved with basic, strategic and applied research in crop improvement for almost four decades. My research was always led by genetics and with a focus on plant breeding in self- and cross-pollinated species (which have disomic, trisomic, tetrasomic, and hexasomic inheritance; sexual and vegetative propagation; plus annual and perennial production). Such a working agenda has provided me with a good conceptual underpinning and knowledge for the sustainable use of genetic resources in crop improvement. I gave priority to the utilization of wild species and landraces for the development of elite progenitors and cultivars of banana, durum wheat, plantain, potato and sweet potato, which are adapted to the target population of environments in which they are grown today by African farmers. The types of gene action and heritability for economically important traits were also determined, as well as methods and tools to improve breeding efficiency were pursued. I have participated in the development of genetic maps with DNA markers for diploid field cress, triploid banana, tetraploid potato and durum wheat, and hexaploid bread wheat, and their further use for mapping genes or quantitative trait loci (QTL).

What are the implications of your research for the society?

Let’s use the potential impact of the newly released durum wheat cultivars for the Senegal River Basin as an example. They may yield between 3 and 6 metric tons (MT) of grain per hectare (ha) [depending on soil type and temperatures], and with a fast cycle of just 92 days between planting and harvest. This bred-germplasm discovery, if properly supported, has the potential to replace the fallow period between rice seasons with a productive durum wheat crop. Calculations based on the lowest recorded yield (3 MT per ha) and the FAO measured 200,000 ha of irrigated rice land cultivated in Mali, Mauritania, and Senegal, estimate that up to 0.6 million MT of new food could be generated without affecting the current cropping cycle. Since high-quality durum wheat grains are traded on the international market at € 300 to € 400 per MT, approximately 30% higher than top-quality bread wheat, and up to 70% higher than low-quality ones, this outcome could be converted into a significant new business of over € 180 million per year.

Congratulations on receiving the prestigious Bertebos prize from The Royal Swedish Academy of Agriculture and Forestry! What does the award mean to you?

This Prize acknowledges that the deployment of high-yielding, stress-resilient cultivars with well-adapted performance, in combination with improved agronomical practices, are key in any strategy to reduce famine and poverty in the Global South, which is also being affected by global warming due to the changing climate.

The release of new cultivars, which is the “bread and butter” of plant breeding, also steadily increases crop production from existing farmland (i.e., sustainable agriculture intensification), thus contributing greatly to a bio-based economy. Crops can achieve both yield increase and stability through plant breeding. Yield potential and stability can be enhanced through direct genetic gains for this trait and by improving host plant resistance to target pathogens and pests. Adaptation to stressful environments will enhance the resilience of crops. Likewise, bettering the quality and safety of food could be among achievable plant breeding aims. The genetic enhancement of crops can reduce or eliminate undesired toxic molecules or lead to cultivars showing preferred nutritional traits. Feed composition will allow both reducing grazing lands and minimizing methane gas emissions. The intrinsic traits of feedstock sources for bio-based materials may also be changed through plant breeding.

Finally, let´s say you got unlimited research funds; where would your research be five years from now?

If we get grant funding for which we already submitted proposals, there are three research areas to pursue. Firstly, we would like to quantify the changes in the genome due to selection for productivity, host plant resistance, quality characters and the extended microbiome phenotype(s) in a tetrasomic polyploid crop such as potato. We may be also able to determine whether these changes could depend on the distance between the centromere and loci affected by selection. This research may further provide significant insights into the diversity of a polysomic polyploid plant and its related microbiota by revealing changes due to selection during cultivar development, thus giving key information to address Sustainable Development Goal 2 “Zero Hunger”.

Secondly, we would like to implement a knowledge-based genetic enhancement approach for developing potato cultivars by exploiting the use of inbreeding for purging the deleterious genetic load accumulated through the history of breeding this important crop in the country’s family tables. The proposal hypothesizes that by integrating association genetics, genomic prediction and high throughput plant phenotyping, we will be able to screen in early generations, improve the precision of field trials in stress-prone sites, select desired genotypes across segregating offspring, adapt computation breeding tools, and continue catalysing the reorganization of potato breeding, as a result of reducing the cycle time between breeding generations, increasing selection intensity for target traits and improving the accuracy of phenotyping.

Thank you for a very interesting interview, Rodomiro! We wish you the best of luck and success in your future paths!